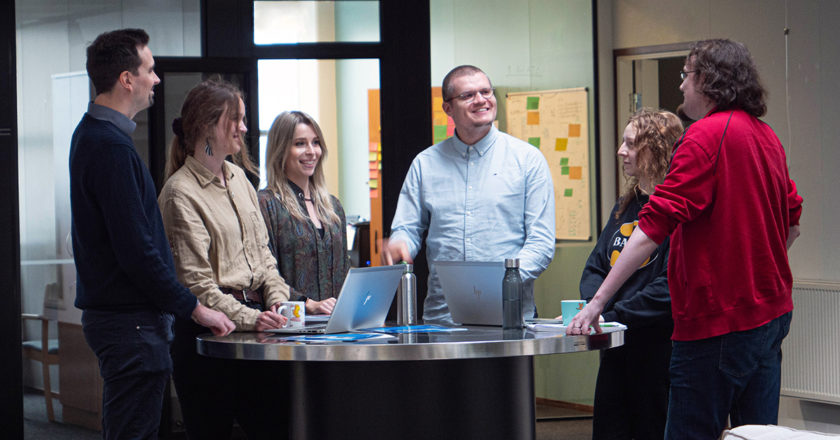 Director of Administration Mari Fromholdt is a visible and important person to Gasmet’s new employees. She welcomes the newcomers and organizes the orientation together with the team managers. By pulling together with the orientation representatives from different departments no one feels uncertain or alone in their new job. Read more on what to expect from the first week working with us.

Fromholdt meets the newcomers with open arms. After the orientation period, she wants each person to comprehend what their job consists of, why they are there, and who are their colleagues.

All roles are deliberately planned

The orientation process is divided between Fromholdt and each of the department representatives. Fromholdt first goes through all the important facts related to company, such as the company values and the work policies. She also shows the newcomers around and introduces them to their new colleagues when touring the premises.

After the tour, the employee is shown how to use different programs and other work equipment by nominated colleagues. Gasmet utilizes a shared orientation plan checklist where all the orientation representatives tick boxes after completing their responsibility. Every new employee, regardless of their position, gets the same comprehensive basic onboarding. For example, in the production department, a newcomer usually receives a work buddy who gives guidance on the job itself.

The first week includes lots of time to interact with the new colleagues and team members. The home team is committed to including the newcomer in meetings, lunches, and coffee breaks.

Relaxed company atmosphere is reflected in the orientation process

As Fromholdt has developed the onboarding practices, she finds it important to measure the related satisfaction inside the organization.

“We send the employees a survey. One part of it particularly focuses on the overall feeling on the first days at the new job. According to the answers, employees have been blown away by the warm welcome the community gives them. The open and friendly atmosphere of the company is reflected already in the early days”.

Fromholdt finds it important that the overall atmosphere is open and relaxed enough that the newcomers feel confident to ask questions. She also hopes that Gasmet’s premises with their modern and neat equipment and workspaces impress them. She believes that the first days are crucial: the big picture of a trusting and caring employer needs to be reflected in the best possible way.

We at Gasmet understand that the employees have a life outside of work as well. Workloads and wellbeing are taken into close consideration.

Fromholdt is really pleased that the teams themselves have taken lot of responsibility in the orientation process. It automatically creates a nice structure to the first days. No one is ever left alone in a company that highly values team spirit. People who participate in the onboarding of a new employee find it refreshing to go through some practices. One might review their own job from an outsider’s point of view as they describe it to someone else.

Teams value a new member who has an open mind and the courage to ask why things are done the way they are. The company’s and its employees’ perspective narrows year after year if nothing ever changes. Even though Gasmet is full of experts, everybody understands and values the fact that new people bring fresh ideas.

Atmosphere is cheerful and fun. “Even on Monday mornings the shout-outs of ‘Who wants to order Thai food for lunch?‘ are echoing in the corridors. I think that is cozy”, Fromholdt laughs.

After the first week, she wants the new employees to have a sense of the overall feeling of the surrounding Gasmet family. And maybe even feel a bit proud of their new workplace.