There is a vast body of literature on trees’ role in tackling the greenhouse effect, especially by reducing CO2 emissions. As is known, during the Northern winter, as our green friends hibernate, the CO2 levels skyrocket globally. When summer finally arrives in the North, forests get back to work and absorb a huge cloud of CO2, bringing the levels down. Trees, in other words, have always been one of our main allies in battling the greenhouse effect.

Did you know that trees have an important role in the exchange of methane, as well? According to recent research, it is not just livestock and rice plantations, et cetera, that release methane – plants do it too.

The volume of methane emissions from forests and plants seems lower, but significant nonetheless: up to 10-30% of the world’s total emissions. If true, this will require thorough examination and repair to our annual methane budgets

For this article, we interviewed Iikka Haikarainen, a doctoral student in Environmental Soil Science at Helsinki University’s Department of Agricultural Sciences. Haikarainen is part of a research group that focuses on emissions of CH4 (methane) from trees in boreal forest ecosystems. They are currently conducting research on greenhouse gases from soil and tree bark in Sweden. 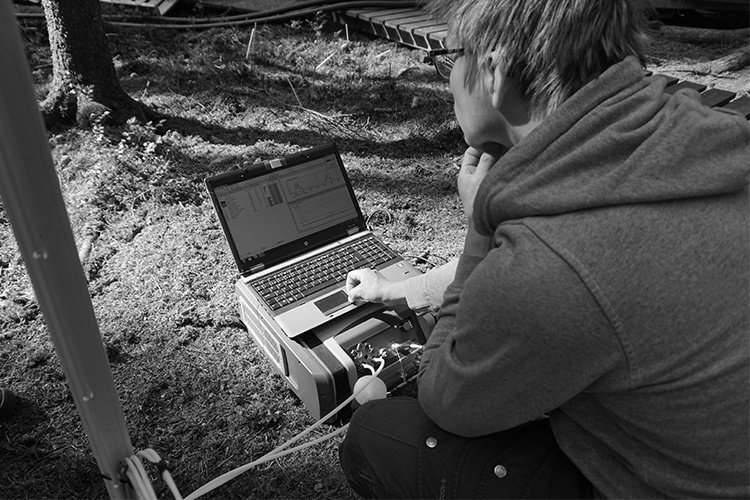 Generally, boreal forests have been conceived as an important methane sink, but Haikarainen’s research might prove us all wrong. The purpose of their research is to gain a deeper insight into the role of forests as methane sources, which previous research has not placed much importance on. Their results point out that boreal forests might, in fact, have a more notable role in the global atmospheric methane budget than we thought.

The group is using Gasmet’s DX4040 gas analyzer (predecessor to GT5000 Terra) for soil flux measurements in the forests of Sweden, and we were very eager to hear how their research was getting along, and how it was in line with the bigger picture of understanding climate change.

Researchers have realized that especially in tropical rainforests, methane emissions from trees are, in fact, quite significant. In Haikarainen’s research, the measured greenhouse gas emissions remain lower, as they focus on the Boreal vegetation zone in the Northern hemisphere. He adds that in spite of methane exchange from tree trunks being lower than in the tropic, the phenomenon is taking place in wetlands in colder climate zones as well.

”Even though we know relatively little about the methane exchange in trees, there definitely is a lot of fluctuation between different vegetation zones and even between forest stands (a smaller unity of trees that share common characteristics)”, he explains.

According to Haikarainen, the methane that forests release develops in the anaerobic circumstances in the soil, where there is very little oxygen. These kinds of premises exist, for example, in woody marshlands where the water table level (WTL) stays fairly close to the Earth’s surface, approximately 5-30 cm deep.

From these anaerobic circumstances in the soil, methane then starts to make its way to the root system and gets absorbed in the trunk as part of the natural oxygen exchange. It slowly rises up in the trunk towards the leaves, where it finally gets discharged as methane emissions.

Haikarainen adds that according to some findings, methane might even develop inside the tree. It is produced by the microorganisms that produce methane as the by-product of their methanogenic activity.

“In addition to CO2 and CH4, nitrous oxide (N2O) measurements are also getting in the mix in the study of greenhouse gas dynamics”, he explains.

What kind of results is the research group expecting to get? According to Haikarainen, they hope to indicate that water table level (WTL) and temperature of the soil are the two main factors affecting the amount of methane trees release. In practice, the water table level dictates the location of the anaerobic activity in the soil. The deeper the WTL, the less likely the roots are to reach down to the pockets of methane in the soil.

As stated, methane emissions from trees might shape the way we think about the greenhouse gas dynamics all in all. Research such as Haikarainen’s, offers valuable and fresh information on natural greenhouse gases and helps us connect the dots in the complex puzzle of climate change. What is more, that as the research develops, we need to be ready to take rapid action in adjusting the annual greenhouse gas budgets globally.