I remember sitting as a student in a lecture hall when our teacher began the lesson by stating that the magic limit of 400 parts per million (ppm) atmospheric carbon dioxide (CO2) had been reached. This happened for the first time in 2013, and by 2016 even the lowest value of the year was over 400 ppm. And by now, the annual mean CO2 concentration is already over 410 ppm. As these numbers lack any relation to the common life, here are some points of comparison from my family: 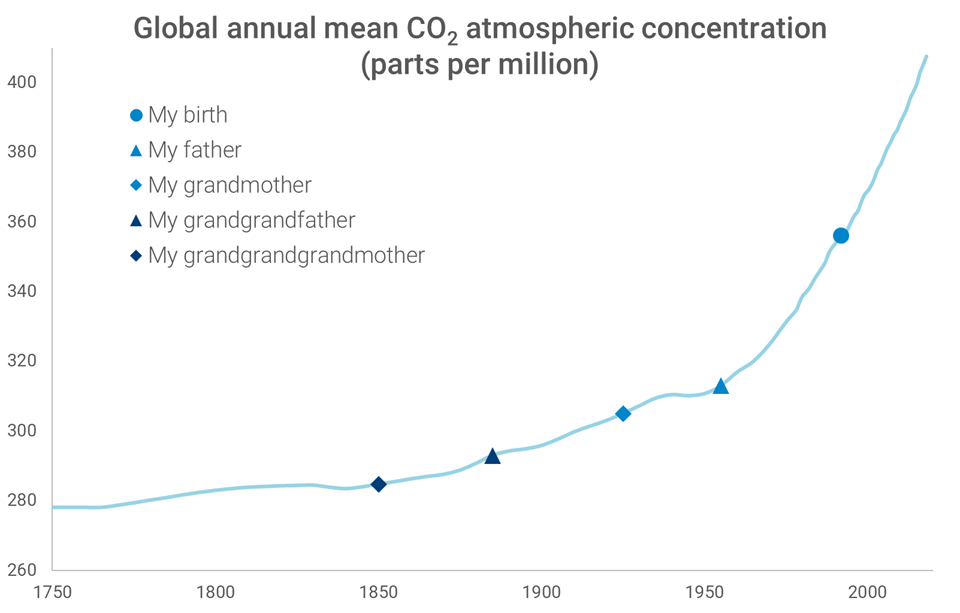 So, as you can see, the increase has been relatively rapid since the 1950s. Furthermore, the highest concentration in the previous 800 000 years had been around 300 ppm. Now, what is the cause of this increase? Of course, atmospheric CO2 concentration is a complex issue with many affecting factors, but one undeniable contributor to such a fast rise is human-made pollution. In 2019, global CO2 emissions were around 36 billion tonnes. Again, using our points of comparison, in 1992 this was only 22 billion tonnes, and in 1954 a tiny 7 billion tonnes.

But why is atmospheric CO2 an issue? Because of the greenhouse effect: CO2 and other greenhouse gases in Earth’s atmosphere prevent heat from escaping to space. This is a natural process, but due to increased concentrations of greenhouse gases, more and more heat is trapped. This, in turn, leads to global warming.

Climate change is real. The current emission levels are not sustainable, and action must be taken before things spiral out of control. There are no silver bullets for this beast – instead, significant changes must be made on several fronts globally. We need innovation and development for increased efficiency; we must move to low carbon fuels; we must increase the usage of nuclear and renewable energy; we must focus on reusing and recycling as much material as possible; we must decrease our consumption of animal-based food; we must limit our pollution by making sure the air and water we let into nature are as clean as possible.

Now, a lot of industrial emissions are already regulated. For example, in the EU, the Industrial Emissions Directive (2010/75/EU) regulates polluting emissions from industrial installations. Components and their emission limits depend on the industry, burned fuel, and the size of the plant, and the emission limits themselves are based on the best available technology. There are also strict quality assurance standards to ensure that the equipment used to measure these emissions is up for the job. But so far, CO2 is not required to be measured or mitigated. And if we want to keep climate change to a minimum, this must change on a global scale. Global emissions must come down, and this must include CO2.

Let’s next dive a little further into this idea of reducing CO2 emissions. Some of it can be prevented by, for example, changing into renewable energy. But this will not happen overnight, and not all CO2 sources can even be changed. For instance, in the cement industry, CO2 is emitted as part of the chemical process. This is why we need ways to stop generated CO2 from being emitted. This means Carbon Capture, Utilization, and Storage, or CCUS – also commonly known as CCS. It means capturing CO2 instead of emitting it and then either storing it indefinitely or using it in a way that will decrease overall emissions. Carbon capture in itself is nothing new. It has been done on an industrial scale for almost a century in, for example, natural gas treatment or synthesis gas production. However, this captured CO2 was mainly simply released since there was no reason to do otherwise. Nowadays, with the effects of climate change more evident each year global interest in CCS is higher than ever.

Carbon Capture and Storage (CCS) in a nutshell

At its simplest, there are two types of emissions: large individual emitters (such as power plants and factories) and scattered emissions (such as from transport and heating). Scattered emissions should be handled mainly by other means such as increased efficiency, low carbon fuels, and renewables, as carbon capture is not (yet) really suitable for these. Carbon capture is ideal for large individual emitters. However, it can also be done directly from the air to some degree.

There are many different ways to capture CO2, and it can be done in different stages of the process using different methods. However, the most prevalent system at the moment is post-combustion amine absorption. Here, the fuel is first burned normally, and then the CO2-containing flue gas is directed through a tower filled with an aqueous solution of certain amines, so far most often monoethanolamine. Amines are a group of nitrogen-containing chemicals, and in this aqueous solution, they react with CO2, stripping it away from the flue gas. This amine solution is heated at a separate point of the process, and captured CO2 is released. At this point, it will be compressed for transportation to either storage or utilization site.

CO2 is captured because we don’t want it in our atmosphere. Now we have the question, what to do with it? As a crude simplification, we pump it deep underground in gas pockets covered by impermeable layers of caprock. Down there the combined effect of temperature and pressure also leads to such an increase in density that CO2 only takes a few percent of the volume it occupies on ground level. If we don’t want to simply store the captured CO2, there are also different ways to use it industrially. For example, it can be combined with hydrogen to manufacture different chemicals and fuels. It can even be turned into food, as Finnish scientists have demonstrated.

Carbon Capture and us

As is the case everywhere with emissions, measurements are important in carbon capture. And Gasmet has a long history with carbon capture measurements – our FTIR technology has been used in carbon capture research before I had even reached adulthood! The flexibility of our solutions has offered the opportunity to test different types of amines and detect any degradation products, even identifying unknown components thanks to our vast gas library. Our devices can also be used to measure CO2 flux near storage facilities.

Future may be uncertain, but carbon capture will certainly be a part of it. According to Intergovernmental Panel on Climate Change, if we want to reach our climate targets, it will be over twice as costly without carbon capture (IPCC, 2014: Climate Change 2014: Synthesis Report, p. 86, table 3.2.). And it will be especially important in industries where CO2 emissions cannot be prevented by changing fuel, such as the cement industry. Carbon capture will also be important as a transitory gateway – it allows us to negate fossil fuel emissions as we transfer into a low carbon world.

The writer is our Application Chemist, Veikko Halkosaari. He hopes to work towards a greener future, and with this in mind, he joined Gasmet in 2019 after researching sustainable adhesives for his Master’s Thesis. His main tasks are to help our sales, distributors, and customers in their analytical challenges.

The development of carbon capture and storage (CCS) technologies relies on the accurate measurement of carbon dioxide (CO2) in addition to a wide arra... Read more