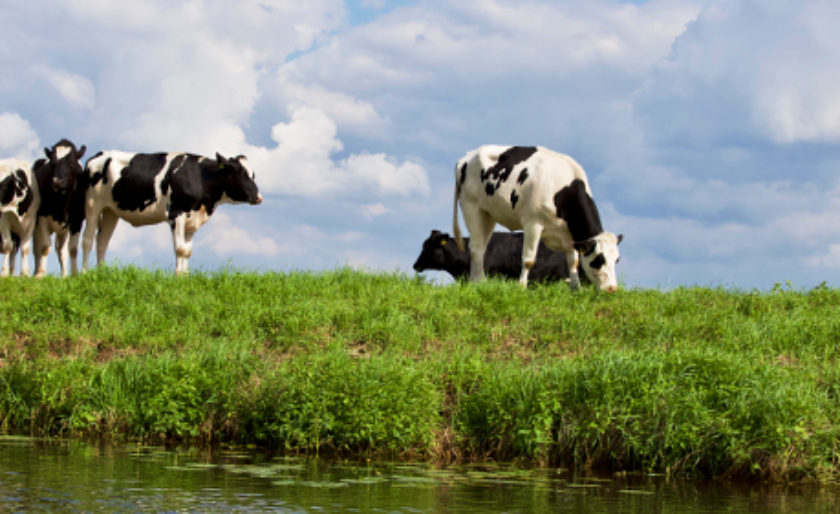 Researchers in Denmark have measured the quantities of greenhouse gases in the breath of dairy cows and demonstrated a heritable variability between individual animals.

Researchers in Denmark have measured the quantities of greenhouse gases in the breath of dairy cows and demonstrated a heritable variability between individual animals. “This means that we have an opportunity to select for breeding those individuals which will produce offspring that generate less methane,” says Dr Jan Lassen who led the research project on individual methane measurements from dairy cows at Aarhus University.

Over the last 60 years, dairy cattle have been selectively bred to maximise milk production and as a result, cows have become extremely efficient at converting food such as grass, silage, hay and concentrates into agricultural products such as milk and meat. At the same time, feed quality, ration formulation and herd management have all contributed to the overall increase on productivity. However, one of the by-products of rumination, the process by which animals such as sheep and cattle digest food, is methane – a powerful greenhouse gas (GHG).

Retrospective calculations made by (Chase 2006) indicate there has been a 40% reduction in methane emissions per litre of milk produced in the USA from 1944 to 2007. Nevertheless, over the course of a year, the methane from one cow’s belches is currently equivalent to the carbon dioxide emission from a small car. Globally, it has been estimated that livestock account for 15% of total GHG emissions (Steinfeld et al., 2006), so there is a great deal of interest in finding ways to reduce this value.

The global warming potential of methane is about 25 times that of carbon dioxide (Forster et al., 2007), so a small reduction in methane production could have significantly beneficial effects.

Recently, researchers in a number of countries have shown that it is possible to reduce methane emission from cows by altering their diet, but this is only likely to have a beneficial effect on GHG emissions if the necessary feeds are available to farmers at a cost that does not increase the overall cost of the diet, and if these feeds do not have a negative effect on animal production. However, if those individuals that generate lower levels of methane can be identified, it would be possible to build this into breeding programmes.

Methane is a by-product of fermentation in the rumen and is expelled by belching or eructation. Around 80% of ruminant methane emissions emerge from the mouth of the animal, with only 10% emitted from the rear, so the Danish workers have focused on the breath of cows in their research. Naturally, it can be difficult to capture all of a cow’s breath under natural conditions, so the Danish workers constructed a sampling system that collected the breath of cows as they stood in an automatic milking machine – an activity which took place between 2 and 12 times per day during the research programme.

The two main GHGs of interest were methane and carbon dioxide, and these were measured simultaneously with a Gasmet FTIR (Fourier Transform InfraRed) analyser. Initially, a Gasmet DX4030 portable FTIR analyzer was borrowed from the University of Copenhagen for this work, but subsequently a similar analyzer, a Gasmet DX4000 was purchased and built into a customised air-conditioned chamber that protected the analyzer from dust and dirt.

An FTIR spectrometer obtains infrared spectra by first collecting an ‘interferogram’ of a sample signal with an interferometer, which measures all infrared frequencies simultaneously to produce a spectrum. High levels of accuracy and low levels of maintenance are achieved as a result of continuous calibration with a He-Ne laser, which provides a stable wavenumber scale. In addition, high spectral signal to noise ratio and high wavenumber precision are characteristic of the FTIR method.

While the Gasmet FTIR is able to measure methane and carbon dioxide continuously, it also produces spectra for the sampled gases from which it is possible to determine the concentrations of hundreds of other gases. This was an important consideration in the choice of FTIR. “Simpler, lower cost analyzers are available for measuring methane and carbon dioxide,” says Jan Lassen, “but we wanted to build a comprehensive picture of cattle breath analysis, over as many animals as possible and for as many chemical species as possible.

“The Gasmet FTIR is supplied with ‘Calcmet’ software which enables us to store the spectra and this is critically important, because it means that our research can be used by us or other workers in the future.

“Calcmet contains a library of reference spectra that extends to simultaneous quantification of 50 gases or identification of unknowns from a collection of 5000+ gases. This means that it is possible to retrospectively analyse produced spectra for almost any chemical species.

“Initially, we were most interested in methane and carbon dioxide, but in the future we plan to study the levels of gases such as acetone, ammonia, ethanol and nitrous oxide. These gases are very likely to be indicators of metabolic efficiency, so the FTIR spectra could open new opportunities for improving the efficiency of animal production.”

Similar research at the University of Nottingham, UK, also concluded that variability between individuals might offer opportunities for genetic selection (Garnsworthy et al., 2012).

Much of the success that has been achieved in the improvement of dairy cattle performance has been through the selection of bulls with offspring that display desirable traits – high milk yield or beef production efficiency for example. This research has shown that it is possible to measure the methane production rates of cattle and thereby to infer a ‘methane score’ for individual bulls, so that this could become a selection criterion for farmers when choosing sires for dairy herds.

By selecting sires with a good methane score, dairy farmers could make a significant contribution to the fight against climate change. However, it may be difficult to encourage them to make such choices unless there is a significant commercial reason for doing so. On this point, Jan Lassen says “The eructation of methane represents a loss of energy and therefore a lowering of production efficiency, so it makes commercial sense for farmers to select individuals with a better methane score, not just because it helps fight climate change, but also because it probably improves the efficiency of ruminant digestion in offspring.”

Dr Lassen hopes that international projects that aim to combine the data obtained from research such as his with others in other countries can be initiated soon. For example, he is aware of several researchers conducting similar work with Gasmet FTIR analyzers in other countries, and gas analysis spectra from these projects will be combined to improve the understanding of methane production heritability. However, these spectra also offer an excellent opportunity to analyse different chemical species in order to further investigate ruminant productivity.

FTIR gas analysis is now being employed for the measurement of GHGs in a wide variety of applications including industrial emissions, automotive emissions, and gas flux measurements in Arctic soils. This provides two important benefits for future research; firstly, Gasmet staff are now highly experienced in configuring systems to measure GHGs and secondly, an enormous library of stored spectra has been created, which will help future researchers to analyse both new and old measurements.

As more data is collected from larger numbers of cattle, it will become possible to establish a methane score for specific bulls and Dr Lassen is optimistic that this will become a selection criterion in the future.