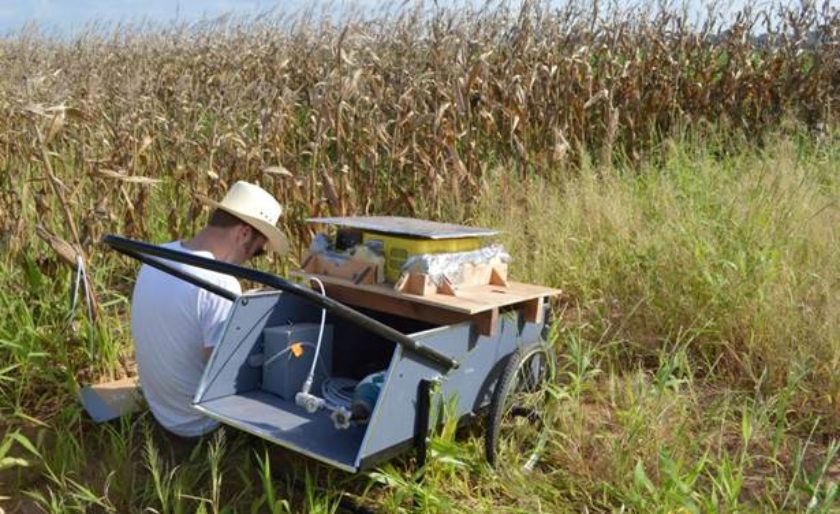 During the production of bioenergy crops, GHGs such as carbon dioxide, nitrous oxide and methane are lost from the soil through both natural and managed biogeochemical processes, and the researchers were able to measure these gases by installing collars within field study plots. Chambers of known volume were then fixed to the collars, and tubing connected the chambers to a Gasmet DX4030 multiparameter FTIR analyser which measured increases in gas concentrations inside the chambers’ headspaces over time (GHG diffusing out of the soil).

Agronomic management practices (fertilization, crop rotation, organic residue management, etc.) can affect the amount and type of GHG emissions that are lost from the soil. The researchers therefore studied the management production scenarios that are employed to produce bioenergy crops in order to determine which scenarios provide the greatest sustainable long-term yields and simultaneously minimise GHG emissions. The study analysed both direct GHG emissions (arising from the field trial itself) and indirect GHG emissions (arising from the production and delivery of trial inputs – such as tillage, planting, fertilization, irrigation etc.), soil carbon sequestration to a 3-foot depth, and theoretical biofuel yield from eight different sorghum production scenarios.

Although residue return and nitrogen fertilization offered the least GHG emission reduction, the researchers have suggested that these may be necessary management practices to sustain both long-term economic yield and soil quality. Additional research is therefore required to evaluate optimal nitrogen and biomass residue application rates to minimise GHG emissions while sustaining long-term yields.

“In addition to the GHG/sustainability measure, the emissions data from the FTIR analyser also helps us to better understand the carbon and nitrogen cycles within the cropping systems.”

The Gasmet DX4030 employs an FTIR spectrometer to obtain infrared spectra from each gas sample by first collecting an ‘interferogram’ of the sample signal with an interferometer, which measures all infrared frequencies simultaneously to produce a spectrum from which qualitative and quantitative data are produced. Over a number of years, Gasmet has established a vast library of FTIR reference spectra. This means that users of the Gasmet FTIR analysers are able to specify those compounds that they wish to monitor, so that the instrument can be configured to provide simultaneous almost real-time readings. It is also possible to reanalyse produced spectra with the instrument’s PC based software (Calcmet) and thereby to identify unknown gases.

In a project involving algae-biofuel production (extracting lipids from aquaculture-farmed algae to produce liquid biofuels) researchers at Texas A&M University are looking at ways to utilise the leftover coproduct as organic fertiliser, because the dry algae coproduct still contains valuable nutrients. A part of the project involved a greenhouse experiment using PVC soil columns mixed with selected rates of the algae coproduct and wheat straw. In this application, the researchers utilised the DX4030 to evaluate how the addition of the coproduct influenced GHG emissions over time.