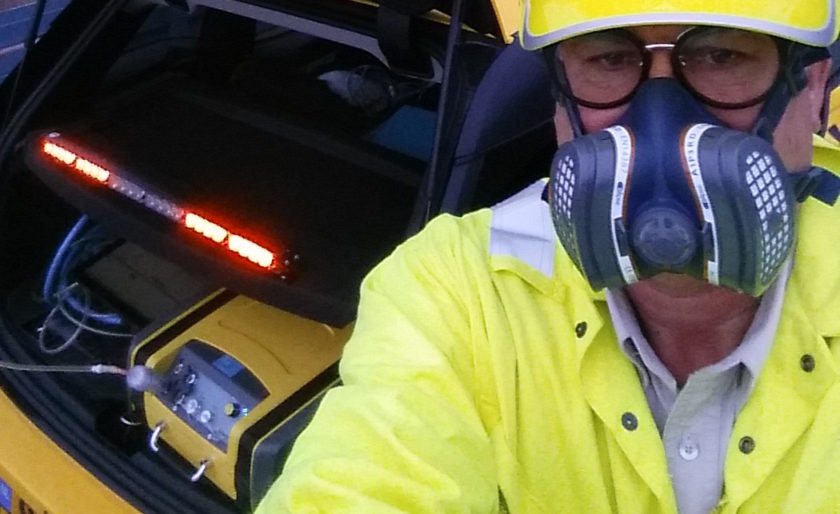 It is therefore necessary to examine containers before entry and this work is usually conducted with a wide variety of gas detection techniques in order to be able to assess, individually, all of the substances of greatest concern. However, a Dutch firm of health and safety consultants, Reaktie, has employed Fourier Transform Infra Red (FTIR) gas analysis to dramatically improve the speed and effectiveness with which containers are assessed, because this technology enables the simultaneous measurement of the 50 gases of most concern.

There are two potential sources of hazardous chemicals inside cargo containers; fumigants and chemicals that arise from the goods or packing materials.

Fumigants are applied to goods to control pests and micro-organisms. Cargoes most likely to have been fumigated include foodstuffs, leather goods, handicrafts, textiles, timber or cane furniture, luxury vehicles and cargo in timber cases or on timber pallets from Asia.

According to the IMO’s international regulations, ‘Recommendations on the safe use of pesticides in ships’, fumigated containers and ship cargoes must be labeled giving specifications about dates of fumigation and the fumigation gas used. Furthermore, appropriate certificates are necessary and these records have to be forwarded to the port health authorities. However, absence of marking cannot be taken to mean fumigants are not present. Containers marked as having been ventilated after fumigation may also contain fumigant that was absorbed by the cargo and released during transit. There is also concern that fumigants may be retained in the goods and subsequently present a hazard to logistics providers, retail staff and consumers.

Common fumigants include Chloropicrine, Methyl bromide, Ethylene dibromide, Sulfuryl fluoride and Phospine. However, with over 20 years of experience testing gases in containers, Peter Broersma from Reaktie says, “While the fumigants are highly toxic, the number of containers exceeding Occupational Exposure Limits (OEL) due to other chemicals is much greater and the number of ‘failed’ containers is likely to rise as more containers are tested, detection methods improve and new gases are identified.”

Containers often travel for extended periods and experience a wide range of temperatures. It unsurprising therefore that unsafe levels of gases should accumulate in the confined space of a container. Peter identifies the typical sources of gases over their OELs as follows: solvents from glues used to produce clothing, accessories and shoes; 1,2-dichloroethane from plastic products; PVC; blister packaging; formaldehyde found in cheap furniture but also in used pallets and lashing materials; solvents and formaldehyde from poly-resin products; carbon monoxide from charcoal and natural products; carbon dioxide from natural products and ethylene oxide from medical equipment sterilised with ethylene oxide. Also solvents including Benzene, Toluene, Ethylbenzene and Xylene (BTEX) in Christmas and decoration products; flammable gases from disposable lighters; ammonia in household equipment with Bakelite parts; Volatile Organic Compounds (VOCs) from fire blocks; pentanes and hexanes from consumer electronics and phosphine/arsine from natural minerals such as ferrosilicon.

Major ports have strict regulations in place to protect against potential hazards in cargo containers. In general terms, every incoming stream of products has to be checked for dangerous gases and if one or more gases are detected during the preliminary investigation, all of the containers from this specific producer must be checked. If no gases are detected, it may be possible to only conduct random tests a few times per year. If it is necessary for customs staff to enter a container, all containers must first be tested and if necessary de-gassed.

Since there are a large number of gases that might be present inside a container, the traditional approach to monitoring has been either to employ a wide range of instruments or to use chemical stain tubes for the most common gases, or a combination of both.

Chemical stain tubes provide a colorimetric assessment of an individual gas, typically with an accuracy of +/- 15 percent. Different tubes are available for many gases and results can be obtained between five seconds and 15 minutes depending on the test. Once a result has been obtained, the tube itself is hazardous waste and must be disposed of. Historically stain tubes have been popular because the cost per test is low. However, the number of tubes that have to be employed in order to demonstrate that a container is safe can be prohibitively expensive and time-consuming to employ.

Instrumental gas analyzers that measure either a single gas or a small number of gases impart a similar level of risk to stain tubes because of the possibility of missing or failing to measure a harmful gas. Deploying multiple instruments also presents practical problems because each will require maintenance and recalibration in addition to a power source or recharging. Nevertheless, Reaktie for example, would normally conduct a preliminary assessment with a photoionization detector (PID) for total VOCs; a Lower Explosive Limit (LEL) combustible gas sensor and handheld electrochemical sensors might be employed for toxic gases such as carbon monoxide, phosphine, ammonia and ethylene oxide. A FTIR analyzer would then be employed to measure 50 target gases simultaneously in a test that would take approximately three minutes. This ability to measure compounds individually is important because, for example, whilst a PID gas detector measures total VOCs, it does not provide an individual value for, say, benzene, which is a known carcinogen.

One of the potential problems with electrochemical sensors is their inability to cope with high concentrations in a sample gas. This can result in poisoning of the cell, which would normally lead to instrument failure. In contrast, similar high concentrations do not harm FTIR, and the instrument can recommence analysis after a few minutes of backflushing.

Peter Broersma has been one of the first to utilize FTIR in the assessment of containers since it became possible to acquire the technology in a portable battery powered unit. He says, “The problems with hazardous gases in cargo containers is now widely publicized and the requirement for testing is growing as employers fulfil their responsibility to protect the health and welfare of staff. However, the traditional testing methods are laborious, time-consuming and risk failing to find a potentially harmful gas.

“FTIR has long been established as an accurate technology for the simultaneous measurement of gaseous emissions from industrial processes, so when the Finnish company Gasmet developed a portable version we were very eager to investigate its feasibility in container testing.

“Following our initial tests, we worked with Gasmet to develop a configuration for the portable FTIR (a Gasmet DX4040) that would measure the 50 compounds of greatest concern. As a result, we are now able to test for all of these gases in around three minutes, which dramatically lowers the time taken for container inspection and greatly increases the number of containers that can be examined every day.

“A further major advantage of this technology is the minimal amount of calibration and maintenance that is necessary. A new instrument can be delivered pre-configured and factory calibrated and from then on the only calibration required is a quick zero check with nitrogen once or twice per day. As a result, it is not necessary to transport a large number of expensive, bulky calibration bottles.

“We now use a portable FTIR for all of our container examination work and we have also supplied a number of these units to freight companies that wish to conduct their own testing. This technology is now in use at Rotterdam, Amsterdam, Vlissingen, Antwerp and Hamburg, and a company providing ship fumigation and degassing is using portable FTIR all over the world.”

A FTIR spectrometer obtains infrared spectra by first collecting an ‘interferogram’ of a sample signal with an interferometer, which measures all infrared frequencies simultaneously to produce a spectrum.

Over a number of years, Gasmet has established a library of reference spectra that now extends to over 5,000 gases containing both quantitative and qualitative information about each compound. This means that it is possible to reanalyze produced spectra with the instrument’s PC based software (Calcmet) and thereby to identify unknown gases – a major advantage of FTIR.

While FTIR is able to analyze an enormous number of gases, the technique is not suitable for inert gases, homonuclear diatomic gases (eg. N2, Cl2, H2, F2, etc.) or H2S (detection limit too high).

High levels of accuracy and low levels of maintenance are achieved as a result of continuous calibration with a He-Ne laser, which provides a stable wavenumber scale. In addition, high spectral signal to noise ratio and high wavenumber precision are characteristic of the FTIR method. This yields high analytical sensitivity, accuracy and precision.

Millions of containers arrive in international ports every year and it is clear that a large proportion of them represent a significant hazard. Employers have a duty of care to protect their staff and court cases have found in favor of workers that have suffered ill-health from container gases. It is inevitable therefore that the amount of testing required will continue to increase so there will be a greater emphasis on speed, risk reduction and cost.

Portable FTIR gas analyzers substantially reduce the amount of equipment required to test a container, but more importantly, the technology enables the simultaneous analysis of a large number of target compounds, which improves the effectiveness of the assessment and reduces risk to staff. The technique is also much faster and avoids the use of disposable equipment.