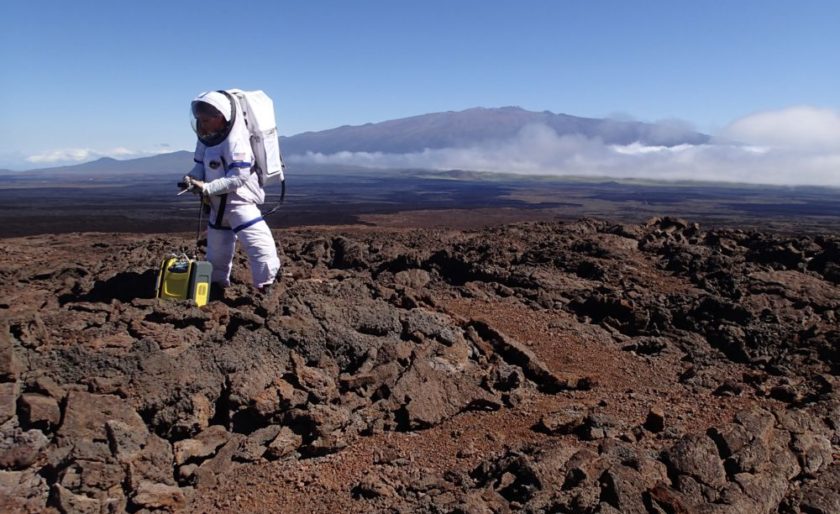 As part of a project to measure the effects of long-term isolation on astronauts, small groups of individuals have been selected to live in a tiny ‘Habitat’ perched on the upper slope of a volcano in Hawaii. In doing so, the project team has contributed to the understanding of issues that would confront a manned mission to Mars.

As part of the project’s research NASA’s Anne Caraccio studied off-gases from the crew’s trash with a portable Gasmet FTIR gas analyzer.  “Waste from the crew’s everyday activities are routinely sorted and stored, but we need to know the composition of the off-gases from these materials for health and safety reasons, and also to determine whether these gases could be utilized beneficially,” Anne reports.

The work was undertaken during the second of four HI-SEAS (Hawaiʻi Space Exploration Analog and Simulation) missions which involved living with 5 other crew members for a period of 120 days in a two-story solar powered dome just 11 metres in diameter with a small attached workshop the size of a shipping container. In addition to the completion of a range of tasks that were set by the project, each crew member conducted their own research, which in Anne’s case was known as ‘Trash to Gas’, a programme working on the development of a reactor to convert waste from long-duration missions into useful commodities such as water, life-support oxygen and rocket propellant.

The main objective of the second HI-SEAS mission was to evaluate the performance and the social and psychological status of the crew members whilst they lived in cramped isolated conditions in a lava rock environment that resembled Mars. Crew members were allowed outside of the Habitat, but in order to do so they had to wear simulated spacesuits and undergo a 5 minute mock compression/decompression. Since the FTIR gas analyzer is portable (14Kg), Anne was able to conduct additional monitoring both inside and outside the Habitat in order to compare data with the waste off-gas measurements. “Size, weight and portability are obviously of major importance on a project such as this, but the main advantage of this technology was its ability to measure a large number of compounds simultaneously; I measured 24 VOCs such as acetaldehyde, methane and ethylene, but the instrument also stores spectra for the measurements so it is possible to retrospectively analyze data if it becomes necessary to look for a particular compound at a later stage.”

The FTIR gas analyzer, a DX4040, was supplied by the company Gasmet Technologies. “We were very pleased to be able to help with this project,” says Gasmet’s Jim Cornish. “The simultaneous monitoring of multiple compounds is a common application for our FTIR analyzers, however, they are usually employed measuring gases in stack emissions, industrial processes, greenhouse gas research and in hazmat scenarios. We usually tell prospective customers that advanced FTIR technology is simple to use; ‘it’s not rocket science’ we tell them, so I guess we will have to rephrase that now.”

The waste produced during the HI-SEAS mission was measured during the entire mission, although this was for a shorter period than would be expected of an actual long duration mission.  The Trash-to-Gas reactor processed HI-SEAS waste simulant at the Kennedy Space Center with results demonstrating that a future reactor would be most efficient with specific material processing cycles to maximize the desired output.  Automation will also be needed in the future Trash-to-Gas reactor because the current technology would require too much of a crew member’s logistical time.

The Trash-to-Gas reactor first converts waste into carbon dioxide, which is then mixed with hydrogen in a Sabatier reaction to produce methane and water. The Kennedy Space Center Trash-to-Gas reactor processed three waste types and produced 9% of the power that would have been needed during the HI-SEAS mission.

As part of the psychological assessment, each member of the crew completed regular surveys and kept diaries. They also wore ‘sociometric’ badges that recorded conversation patterns and voice tone. Commenting on the psychological results of the project, Anne says “The crew were essentially strangers when they entered the Habitat, which is unlike a typical space mission in which the crew would have worked and trained together for a number of months or even years. Nevertheless, the crew coped extremely well with living and working in such close proximity, and there were no significant periods of stress in my opinion.”

The third Hi-SEAS mission began on October 15, 2014. Again, a 6 member crew will conduct a similar mission, with the exception that it will last for 8 months. Anne says: “Participation in these missions requires a real passion for science, technology and space travel. The application process includes a class 2 flight medical, a personal research project proposal, essays, interviews and educational requirements, all of which is similar to the NASA astronaut application procedure.”

Looking forward, Anne says: “The technology to travel to Mars has not yet been fully developed, but it is anticipated that a human mission could be possible in the future. The journey to Mars would take around one year, so I hope that our Trash-to-Gas research will contribute to the science that could make such a mission possible.”